The controlled synthesis of functional organic macromolecules is an important topic in the areas of materials science and chemical biology. After continuous development in the recent decades, polymeric materials in micrometer to nanometer size have shown great potential in targeted delivery, recognition, triggered response and release, biocatalysis and multivalent enhancement. In addition, the emergence of various living polymerization strategy has significantly facilitated the controlled synthesis of functional polymers, making it much easier for effecting chemistry for macromolecules with desired functional moieties. By combining known synthetic strategies and molecular biology mechanisms, rationally designed novel macromolecules can be used as catalytic, antimicrobial, delivery or targeting moieties, or as tools for studying complicated mechanisms in living organisms. Useful as it is, such design and application has become a frontier in materials science and chemical biology. As researchers and higher education providers, we want to design new strategies for the several aims listed below, trying to promote the application of nano and polymeric materials in chemical biology and medicine, at the same time training new generations of scientists with good skill, innovation and knowledge in this area.

In all the life forms, enzymes of different structures and functions are essential. By catalyzing different biochemical reactions, they keep metabolism running and sustain life. Enzymes are basically proteins formed from the folding of polypeptide chains, and are called metalloenzymes if metal cofactors are incorporated into the scaffolds. Inside enzymes are hydrophobic cavities, which can selectively bind substrates near the active metal centers, effecting catalytic process and forming the corresponding product with high selectivity and activity. As we can see here, this is essentially a metal-organic catalyst “wrapped” by a polymeric ligand, which provides selectivity over substrates and protection on the metal centers, making this combination so powerful that it can perform highly efficient catalysis in the complicated biological environment. 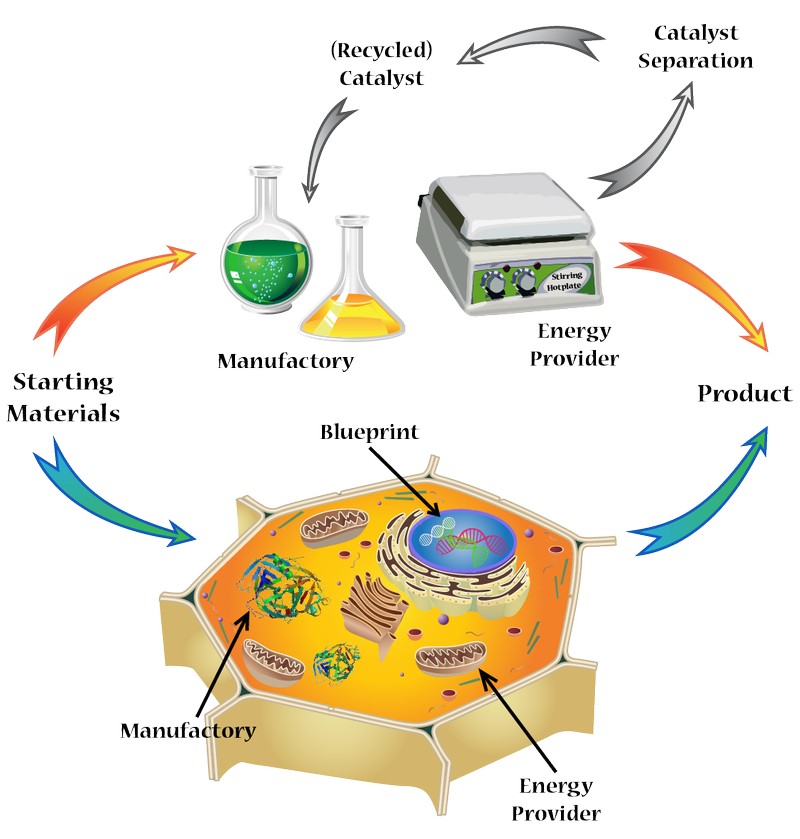 However, enzymatic reactions are “natural” reactions. Although many decades have passed since Wöhler could artificially make urea that thought to be unobtainable without the mysterious “vital force” and ended the hypothesis of vitalism, people are still unable to perform most reactions as efficient as nature does with enzymes. Many important reactions in chemical and pharmaceutical industry are still so “unnatural”, requiring complicated synthetic and purification processes. Despite the large amount of metal-organic and organometallic catalysts reported and used, there are remarkably few examples that can be used in biological environment (aqueous, neutral pH, with the presence of common biomolecules), and even fewer, if existing at all, cases that can be comparable with enzymes in activity and selectivity.

So what if we combine enzyme and synthetic metal catalyst? It can be a good idea but difficulties are many, too. By combining the two we may achieve: 1) metal-organic or organometallic catalysts that work in aqueous environment with high efficiency, which greatly reduces cost and promotes greenization of industrial processes; 2) artificial metalloenzymes that can assist or replace some natural enzymes, in order to “repair” some problematic biochemical processes; 3) artificial “synthetic machines” that work inside cells or tissues to catalyze “unnatural” reactions, which can be very useful as tools in chemical biology and medicinal chemistry. Although the three aims look markedly different from each other, they share the same difficulty in getting high activity, biocompatibility and stability simultaneously. Some researchers have started trying to introduce artificial metal cofactors into natural protein scaffolds and perform directed evolution as a process of structure optimization. This is clearly learning from the mother nature, in hope to utilize the polypeptide scaffold to enhance the existing catalysts with an enzymatic working style.

Intracellular catalysis has the potential to be one of the most important tool in the field of chemical biology. Highly efficient intracellular catalysis can activate an unnatural reaction in a specific location inside cells, affording a functional molecule on demand. For example, if a macromolecular catalyst has selectivity when entering cells, then a anticancer compound may be synthesized only inside cancer cells. Some molecules, small or large, may be synthesized inside cells directly to avoid possible difficulties in introducing them into the cells. Since the concept of intracellular catalysis was announced in 2006 by Streu and Meggers using a ruthenium catalyst as an example, this field has been advancing with considerable difficulties in expanding catalyst pool, concentration limitation, reactivity, biocompatibility and so on. We want to combine the knowledge from chemical biology, organic chemistry and polymer chemistry to seek a solution for the problems in intracellular catalysis. In short, we hope to generate enzyme-mimicking structures combined with artificial metal cofactors. Inspired by nature, such artificial catalysts can bring solubility and biocompatibility from their hydrophilic exterior and a stable, highly efficient catalytic center from their hydrophobic cavities in the interior, which may lead to a system that allows changes in catalytic centers while keeping the artificial skeleton to give a multifunctional catalytic platform.

Although the invention of antibiotics in the 20th century had doubled the life expectancy of humans, bacteria infection is still an important problem worldwide. For example, tuberculosis is a common infectious disease with high mortality rate especially in the developing countries, ranking in the top 10 reasons among all the human deaths on earth. Even in developed countries and regions, large-area infection and multi-drug resistant bacteria infection are still causing many deaths in hospitals. The wide use of antibiotics is also causing more and more severe problems from antibiotic resistance, leading to limitations of the use of many antibiotics in clinical trials, further promoting the need for the development of new antibiotics.

As a hot research area in the recent years, antimicrobial polymers hardly generate any drug resistance. Nonetheless, due to their low therapeutic index, there has not been any case in this category approved by the FDA. In contrast to most small molecular antibiotics that use a “target-and-inhibit” mechanism, the bacteria-killing effect from antimicrobial polymers solely rely on membrane disruption by inserting their positively charged hydrophobic chains into the lipid bilayers of bacteria membrane. Because this process is purely phyiscal and the synthesis of membrane involves so many biochemical processes, it is extremely difficult for bacteria to evolve from random mutations to gain resistance to such a killing process. However, since lipid bilayers also exist in mammalian cells, it is also difficult for antimicrobial polymers to gain enough selectivity toward bacterial membranes, leading to relatively low therapeutic indices. Although it is possible to improve therapeutic index by synthesizing and screening different macromolecular structures, this approach is significantly limited by the similarity of mammalian and bacterial cell membranes.

One additional advantage of antimicrobial polymers is that they can change the permeability of membranes. On the one hand, due to the disruption of membrane by the polymers, permeability increase of bacterial membranes can occur, allowing small molecule antibiotics and macromolecules to enter the bacteria, giving a potential synergistic effect. On the other hand, antimicrobial polymers can enter mammalian cells with ease, killing intracellular bacterial pathogens. This can be extremely important for some persistent disease with intracellular pathogen involved, such as tuberculosis.

Gene delivery vectors are scaffolds that can pack DNA/RNA and deliver them into target cells. Getting the right gene into cells and making the cells expressing these genes is one of the key steps in generating disease models, biosynthetic systems, cellular models. Therefore, such delivery vectors have been playing a key role in chemical biology and molecular biology research. Polycations are a family of macromolecular gene vectors that pack DNA using electrostatic interactions with the negatively charged phosphates. These polymers can form polyplexes with DNA, get endocytosed by the cells, and eventually release the DNA cargo into the cells and allow them to be expressed. Structures of polycations can vary, including but not limited to polyethyleneimines (PEI), polypeptides, and quarternized amine-bearing polyesters, chitosan derivatives. Usually for the polymers, higher molecular weight and charge density increase DNA packing and delivery efficiency, but at the same time lead to higher cytotoxicity and hindered DNA release in cells. Based on the above considerations, we aim to integrate DNA-binding moieties onto the polymers, granting them higher DNA affinity without increasing charge density and molecular weight, so that the biocompatibility of the polymers can be improved. In addition, by using polymers with triggered degradability, it is possible to achieve smart release of DNA inside cells, leading to higher transfection efficiency without compromises on the biocompatibility of the gene vectors.